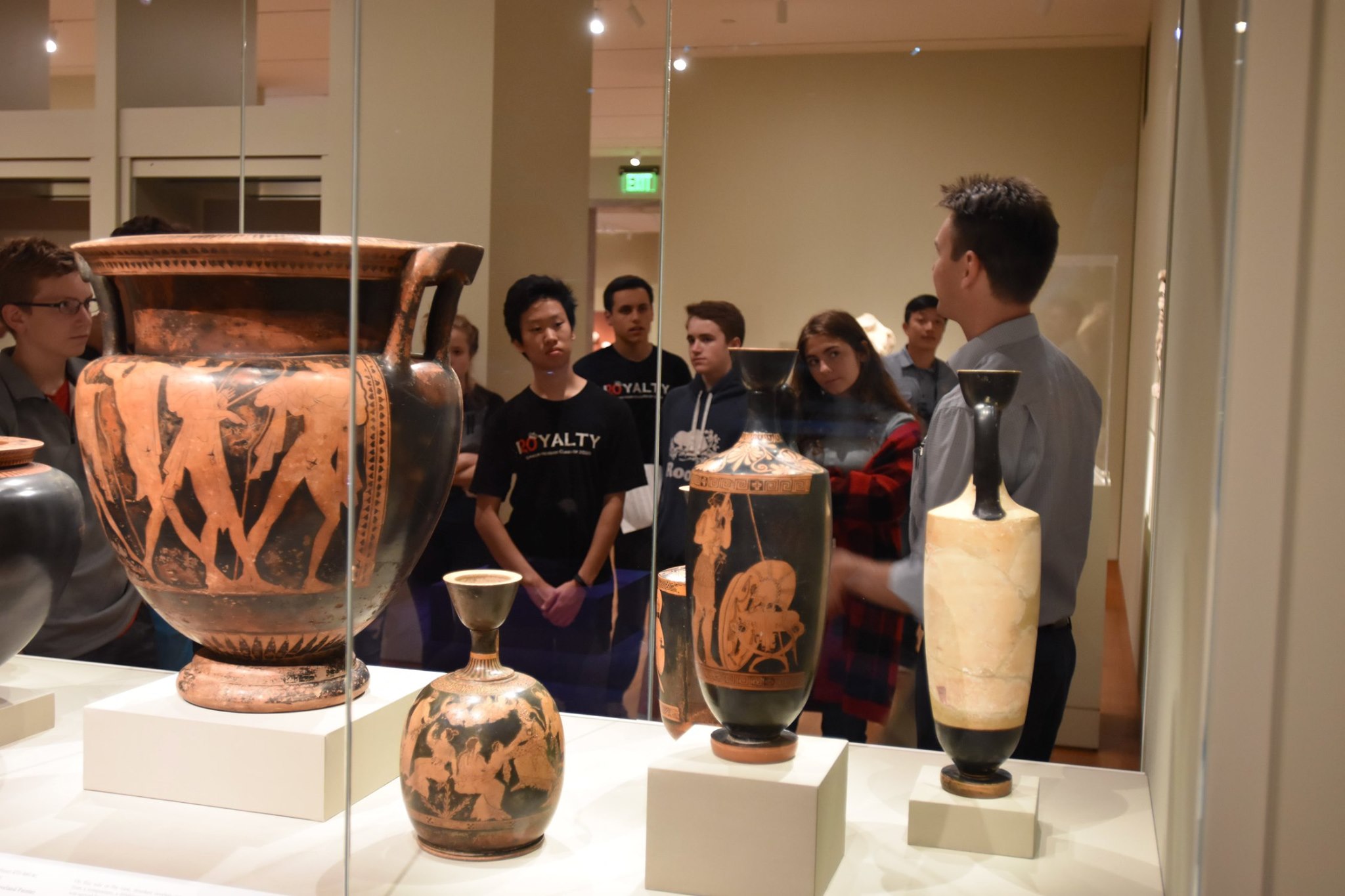 Be sure to check out more photos from Classics Day 2019 on our Facebook page!

If you see a person walking around on Friday, Sept. 27 in a classical helmet with feathers sticking out the top, don’t mistake them for the school’s Spartan mascot; it is classics professor Evelyn Adkins.

The ancient Roman helmet makes an appearance on this one day every year: Classics Day. Classics Day started in 2017 as a way to connect the classics resources of University Circle with the Greater Cleveland area. This year, five high schools with classics or Latin departments and over 100 students will be coming to the Case Western Reserve University campus. The event is sponsored by the CWRU Department of Classics, the Baker-Nord Center for the Humanities, the Cleveland Museum of Art (CMA) and a grant from the Classics Everywhere organization.

As Adkins describes, “the classics will come to life.” Rather than sitting in a classroom hearing about ancient civilizations, cultures and languages, students will be living them. The CMA has partnered with CWRU to make this possible. Here, students will have guided tours showing them artifacts, themes of mythology and the concept of the afterlife in Ancient Egypt. Students will also have the opportunity to get hands-on experience. There will be two sessions available where students can actually hold artifacts, bringing the abstract idea of these long-gone civilizations into a concrete reality. Unfortunately, Adkins will not be allowed inside the galleries in her getup, as she might be mistaken for art.

CWRU is also participating in the activities. Students have the opportunity to talk, dress and see the world as people did a thousand years ago. They will go on a Latin scavenger hunt, having to read clues in the ancient language. They will have the opportunity to make their own Roman stola, a long, draping garment worn by women in ancient Rome. They will also take a trip over to the Freedman Center for Digital Scholarship in Kelvin Smith Library to use virtual reality goggles.

These virtual reality goggles will transport them back in time to a village in Italy called Morgantina. Here they will be able to explore the ancient market place and read different facts about the city that appears all around them. Modern technology and ancient history will combine to create an amazing, interactive experience for students.

But, Classics Day does not just benefit the students—it brings together the Cleveland Classics community. As Adkins says, “It is nice to talk to the high school teachers. We all teach and love the same thing.” Everyone in the community has something to share. The high school teachers bring in their creative ideas of how to teach the classics and engage students. CWRU professors are able to provide research and materials to help bring these ideas to life. The CMA brings their knowledge of the arts and the physical artifacts that students can actually touch. This day functions to inspire and cultivate not only the students, but everyone.

Each person walking around on Friday in Roman stolas and ancient helmets believes that classics are still worth studying. For Adkins, classics have two purposes. First, it teaches students how to speak a different language, a skill crucial to brain development and understanding different cultures. But, she also believes that classics have a larger purpose. Adkins believes that the classics teach empathy and understanding by helping students get “a bigger picture of history and where we as individuals fit in it.”

On Sept. 27, this vision of classics will come alive at CWRU as students touch historic artifacts, wander through the village of Morgantina and finally leave the campus, waving from the bus windows in their Roman stolas.